The Graduate Program in Design and Urban Ecologies at Parsons The New School for Design and The Center for Place Culture and Politics announces the 40 Year Anniversary Symposium of David Harvey’s Social Justice and The City (1973 – 2013), Saturday, May 4 from 10am – 6pm at The New School, 66 West 12th Street, 404. 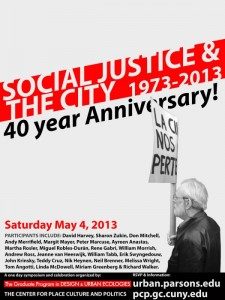 In April 1970, an essay titled “Social Processes and Spatial Form:  An Analysis of the Conceptual Problems of Urban Planning,” was published in volume 25 of the journal Papers of the Regional Science Association. For this first time, this essay constructed an unexplored critique of urban disciplines vis-á-vis capitalism. The result created a dialectical theoretical framework, and forever changed the way many urban practitioners viewed their disciplinary tools and formal training. Ultimately, this heralded an ongoing formation of radically new and unseen forms of urban practice. In 1973, this essay became the first chapter of Social Justice and the City. David Harvey’s seminal second book split the way our cities are read, and created entirely new research paths for his contemporaries and younger practitioners.

Forty years after its publication, Social Justice and the City is as relevant as when it was first conceived. As the processes of urbanization fall faster than ever at the control of the elites, an unprecedented wave of enforced spatial segregation radically alters our urban realities. Today, Social Justice and the City provokes views and directions that remain at the core of any imaginary for resistance, and an action towards the belief that socially just forms of urbanization are possible.

The 40 year commemoration of Social Justice and the City will pay tribute to the lasting work and influence of David Harvey. The day will be introduced by Harvey, who will share his views on the book and its 40 year trajectory. Harvey will then be joined by a diverse array of urban practitioners, from artists to academics and designers, whose practice has been transformed by Social Justice and the City.